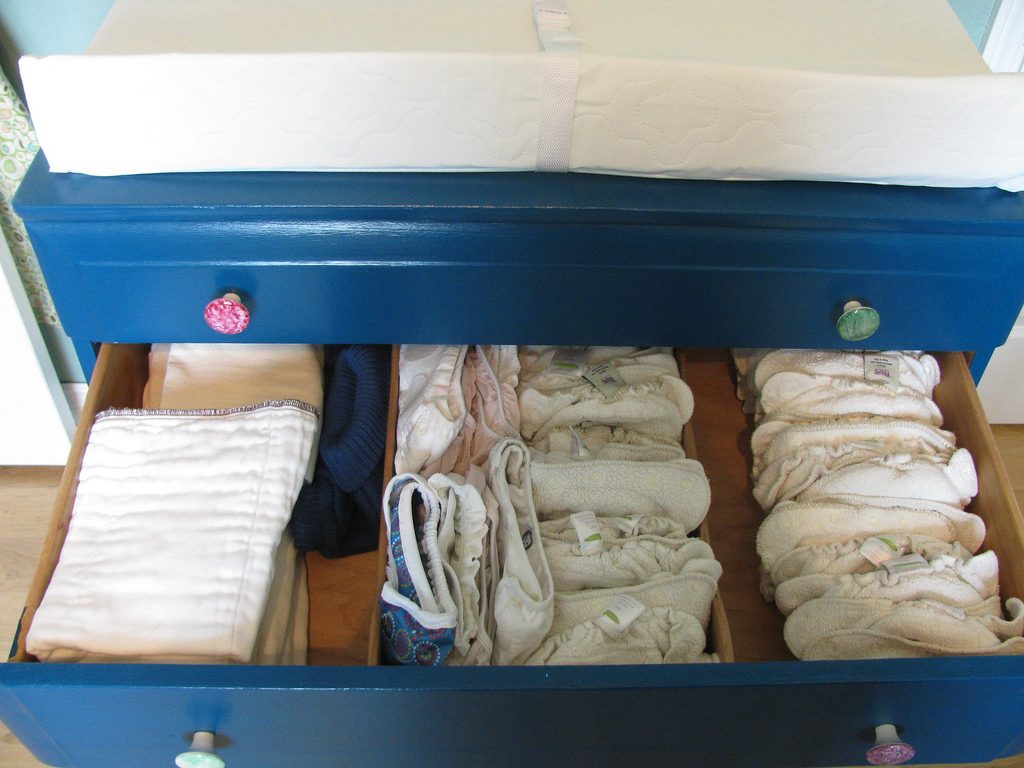 Over the last six years I have compiled and refined a great deal of information about cloth diapers. Many of my friends have found these cloth diapering tips to be useful. If you find the content to be overly descriptive, you must not be a parent yet.

Table of Contents hide
1 Types of Cloth Diapers
2 Cloth Diaper Covers
3 Reusable vs Disposable Wipes
4 The Magical SNAPPI
5 What to Do With Dirty Ones
6 My Favorite Detergent
7 Dealing with Diaper Rash
7.1 Related

There are many varieties of cloth diapers, as I’m sure you’ve figured out at this point. There are the traditional flat diapers, prefolds, all-in-ones, pockets, etc. I only ever used prefolds cloth diapers and pocket diapers. The place I’ve ordered my diapers from is called Nicki’s Diapers. They have a good reputation, good prices, and reasonable shipping.

My top choice are the Indian Prefold Diapers. You can get them bleached white, natural, or organic. My thought is natural ones won’t show stains as quickly. When you first get your prefolds, you’ll have to wash them 3-4 times to fluff them up and get the natural oils out so they are more absorbent. This is called “stripping”. I used both the “Infant” and “Standard Regular” size. The numbers in parentheses, such as (4x8x4) is how many layers are in the diapers, so these would be 4 layers on the outer edges and 8 layers in the center. The “Standard Regular” were still a bit large for Son at 2 months, but they fit well enough you could probably just get those and not have to go to a larger size quite as soon. They say you should get 24-36 diapers. We started out with 24 but then we didn’t have quite enough diapers after 1 day, but at risk of running out after 2. So, I got another 12 and that seems to be a good number. It allowed me to wash diapers every other day without worrying about running out.

We decided to get 6 pocket diapers for night-time and going out. They are good because they keep the moisture away from the skin, they can be stuffed full for lots of absorption power, and they’re as easy to use as a disposable (great for when out, or for other people to use). I still like the pre-folds at home though, since it helps babies learn about being wet.

For diaper covers, I bought both Prowrap Classic and Bummis Super Whisper Wrap. Some mothers say they like one and some say they like the other. I say, even though they are more expensive, go with the Bummis Super Whisper Wrap (velcro version). The Bummis have velcro on the outside and have nice elastic leg areas. This way, the tabs can overlap each other when you close it and you can get it tight around the legs. The Prowraps don’t have velcro on the outside, so they don’t fit so well on skinny babies. And, the legs are not elastic except for these weird little pocket things. In any case, they don’t seal real well so I ended up with more leaking. Also, the Bummis are “Wash & Dry regular settings” so you can wash and dry them with the diapers. The Prowraps have to be air dried, which I found to be an inconvenience. I would say you’ll want 6 of those. They can be used more than once, so you may only use one or two between cycles. But if there’s a lot of explosive poop, you might go through several of them in one day.

For Son I started out using cloth wipes. I figured if I’m already washing diapers, I can easily add in wipes. Keep in mind you’ll change 8-16 diapers a day and you’ll probably use 1 wipe for about half the diapers and 2 for about half and if you buy 36 diapers you’ll probably wash about 20 at a time. Eventually I switched to disposable wipes because they clean so much better.

Finally, the magic, the SNAPPI. I would say they have revolutionized cloth diapering and I would be scared to death to try to use a pin. They are so easy to use. A single pack of baby size is sufficient.

What to Do With Dirty Ones

Depending on whether the purpose is to save money or to be environmentally friendly will determine whether you use wet bags and pail liners or just plastic trash bags (the cheapest option). I’ve found it’s not necessary to store the dirty diapers in water, but adding baking soda to the bag keeps the smell down.

When it comes to diaper covers, I’ve decided you need 6 when it’s still breastmilk poop, and only 3 once it gets solid. Also, I have a diaper sprayer that is great for cleaning poop out of diapers, and it’s easy to install. We decided to get 6 pocket diapers for night-time and going out. They are good because they keep the moisture away from the skin, they can be stuffed full for lots of absorption power, and they’re as easy to use as a disposable (great for when out, or for other people to use). I still like the pre-folds at home though, since it helps him learn about being wet.

Also, when Son first started eating solids, his poop was a peanut-butter-like consistency. I had some flushable liners, but I felt like I was wasting them every time he peed but didn’t poop. So, I started just using strips of old t-shirts. If he pooped, I just threw it out, if he peed, I could wash it. With Daughter I had a diaper sprayer from the beginning and never used any sort of liner.

Washing diapers before baby is on solid food is very easy. I just placed mine in a trash bag in a lidded trash can and when the bag was full it was time for a load of diapers (this is the dry method). Put the diapers in the washing machine and run a cold rinse cycle without detergent. Then, run a regular cycle on hot using detergent. Then just throw them in the dryer. They say you should be particular about what detergent you use because some can be too harsh for baby, some can be too harsh for the diapers (and they’ll wear out faster), some can leave a residue on the diapers and reduce the absorbancy. The website PinStripes and PolkaDots has good information on choosing a detergent. They have a page on detergent for regular washing machines and for HE washing machines. I use Country Save detergent for the diapers. You can use it with both regular and HE machines, although the value is better with HE machines. It’s available at various stores but I purchase it from Amazon.com. ← affiliate link (Note: Don’t buy liquid detergent from Amazon.com because it will end up spilling out in transit.) Also, don’t use a dryer sheet with the diapers because it will also reduce absorbency. Although “All Free & Clear” (non-military version) has a decent rating, I found the optical brighteners killed my liners and they were no longer water-tight until I rinsed them in very hot water about 3 times.