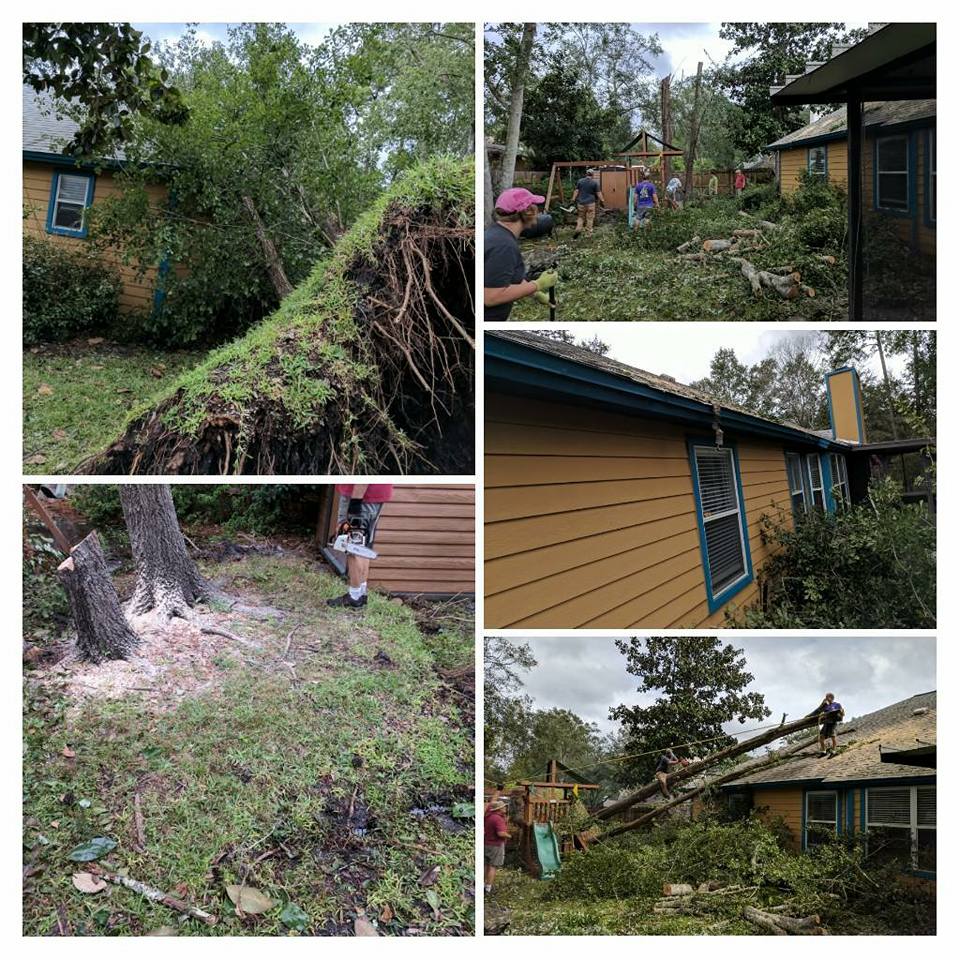 Last week, Hurricane Irma hit the Jacksonville region, and boy, was she a doozy! According to the maps, Irma was only a Category 1 by the time she got to Tampa and had reduced to a Tropical Storm by the time she made it to Gainesville. We’re on the other side of the state, but Irma was a MONSTER! A Nor’easter dropped 12 inches on the area immediately preceding the storm and then Irma came in at high tide. They combined to create record flooding throughout the area.

On Monday morning we awoke to discover what we thought was a branch was two trees leaning against our house and no expectations of power returning any time soon.

Later in the morning we learned about the record flooding. We were told that the water level was much closer to our door than we imagined, and one neighbor at the other end of our street was flooded. Many people closer to the river were severely flooded and had to be rescued by boat.

After staying out of the wind and rain for the first part of the morning we made our way to my in-laws around the corner. They were doing okay but at the front of our neighborhood the drains were backed up. We took rakes and cleared them out the best we could. My husband and another neighbor were able to clear debris from the drainage ditch that had created a dam, and by evening the road was clear again.

After lunch, we were ready to look at our tree situation. Four neighbors immediately joined us and helped us with enthusiasm. If you know us at all, you know we are the kind of people to call someone else. These guys hopped right on our roof and started taking down branches. They were able to remove the trunks with no damage to the house! I don’t even have a rip on a single screen. The tree also missed the playset and our metal shed. We still have lots of logs in our backyard, but while they removed the tree, our family and my in-laws were able to move the small branches to the curb. My kids worked so hard and I’m so proud of them.

All that was left to worry about was the food spoiling. After dinner, we asked a friend that had regained power if they had space in their fridge and freezer. Instead, they graciously lent us their generator and sold us their extra gas below cost.

I went to bed with a much lighter heart than expected. If you wondered where God was in the storm, I can tell you. God showed up in the actions of our neighbors, not just the ones helping us, but everyone that lent a hand. As Mr. Rogers quoted his mother saying, “Always look for the helpers.”

Posted in Musings and tagged AlwaysLookForHelpers, GodIsGood, MonsterHurricane
← Be Strong, Mama: When your baby is crying in publicGod’s Reassuring Love →
Scroll To Top